Warning: count(): Parameter must be an array or an object that implements Countable in /var/www/wp-content/themes/maronpro/lib/metaboxes/init.php on line 746
 A Blank Slate – Genius Improvisor, Actor, & Voice-Over Artist David Pasquesi – Episode 104 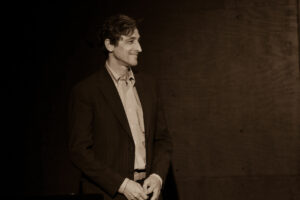 We always love our amazingly talented guests, but this time we were Star Struck! David Pasquesi is a brilliant artist and one of the nicest people you’re ever likely to meet. He is a master improvisor and has created memorable performances in many movies and TV series. He was excellent as Julia Louis Dreyfuss’s ex-husband, Andrew in VEEP and had a great role as the “local alchemist” on the weird and wonderful Lodge 49. He also has done some infamous and long running voice-over spots for clients like McDonalds and Anheuser Busch. We have included his remarkable commercial reel in this episode. You can also go to David’s website to check out his work.

David studied with the legendary improvisation pioneer Del Close, who created the Harold and was part of the first ever Harold team, Baron’s Barracudas. David describes the Harold as a “long form group improvisation that was developed as a performance piece itself as opposed to using it to create material for revues…The aim is that the work is consistently good enough to be able to warrant a ticket price.”

We talk about Del’s ideas about working genuinely in improvisation. Gary reads from David and TJ Jagodowski’s book, Improvisation at the Speed of Life. “Del taught us to play slowly without worrying about entertaining the audience. He stressed the importance of playing at the top of our intelligence…Another big lesson I took from Del was not to talk too much because overusing words diminishes the power of each one. Del taught us to dare to be poets…Don’t be afraid of silence.” 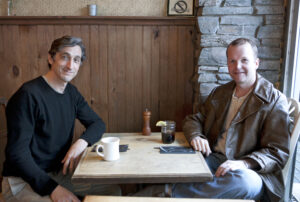 TJ & Dave have been doing long form performances at iO in Chicago and Barrow Street Theatre in New York since 2001. Stephen Colbert says of them, “One of these guys is the best improvisor in the world. And the other one is better.” The New York Times calls their work, “…a creative tour de force, an intellectual high-wire act as astonishing as it is entertaining.” They met on a team at the Chicago Improv Festival and found they shared a reverence for the same kind of work. They make it “more about discovery than invention…The work can be funny, but also sad, heartwarming, kind, scary, brutal. It’s unlimited.” David talks about the important role of the audience. TJ & Dave “requires interested people watching it.”

David and our co-host Frank talk about teaching improvisation. “The most important thing is listening and paying attention…Be genuine moment to moment and the rest of it takes care of itself.” Gary asks about another of David’s teachers and mentors, Charna Halpern, who built ImprovOlympic with Del, has taught so many magnificent actors and writers, and now owns the marvelous iO Theatre at 1501 Kingsbury. There are 4 performances there every night of the week, a nice bar, and good food. Charna gave us great backstory on a few things. Such as: David camped out at her place when he was a student without an apartment and cooked dinner in exchange for his room. She also told us about him juggling apples in his stand up act and that he does great impersonations (not). Learn more about the force of nature that is Charna on episode 47 of our show, performed live at Steppenwolf Theatre.

Frank reviews the superb production of Sheepdog, directed by friend of the show and recent guest, Wardell Julius Clark. Frank says its is an important and powerful play that poses questions that lead to great discussions. Running through February 29. Gary is going to see it Feb. 13 and can’t wait.

David tells us about some of his other important influences. He took his first class with Judy Morgan. Then read Jeff Sweet’s book, Something Wonderful Right Away. David tells us about the importance of the concepts of heat and weight. Heat involves the gravity of the situation and weight is about the emotional charge. Things that they discover about what’s “already there” rather than making it up.

Gary shares his love of a new book called, Life Isn’t Everything, which is comprised of a bunch of old friends talking about improvisor and director, Mike Nichols. 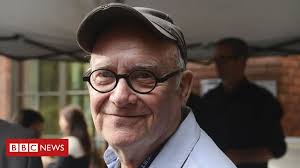 Buck Henry is the focus of our ongoing closing segment celebrating a life of someone we’ve lost recently. What a career! Read the details in this obituary from the Washington Post. He “dabbled in improvisation” and was the screenwriter for The Graduate. He wrote many other memorable films and appeared in every one of them. He hosted 10 episodes of Saturday Night Live. He was a co-creator of Get Smart. Mike Nichols said of Henry, “He was the funniest and most serious guy I’d ever met.” David does a not to be missed impersonation of a dolphin from Buck Henry’s “Day of the Dolphin.”