Deprecated: load_plugin_textdomain was called with an argument that is deprecated since version 2.7.0 with no alternative available. in /var/www/wp-includes/functions.php on line 5007
 George from Midlothian Visits the Podcast - Episode 13 - Booth One 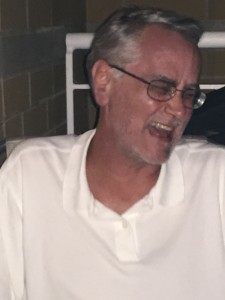 As promised in our first episode, George Schlichter joins us today! Friends since college – Gary, Roscoe and George share memories and a few laughs in this lucky Episode 13. They went to Illinois Wesleyan, Gary and Roscoe majoring in theatre and George in English. George talks about his college stage debut in Waiting for Godot.

They have all been roommates at various times and have tales to tell. George and Roscoe were sharing an apartment in Chicago in 1993 when Roscoe made a brief but successful return to the stage. A highlight was his role in Bailiwick Repertory’s Don Juan on Halsted. Tony Adler’s review suggested that Roscoe’s character “deserved a sequel all to herself.” (read more here) Roscoe describes having found the unexpected ability to move like Margot Fonteyn in 5-inch heels. His rave reviews for this and other roles during his comeback were very exciting. He remembers George calling him, “the toast of two continents.”

Roscoe gives an update on his circus training. We got the Actor’s Gymnasium’s fall class brochure and Roscoe wants to take Contortion. George is not sure Roscoe has conditioned properly for such an undertaking.

They talk about the shocking August 6 GOP debate, featuring 10 of the 19 primary candidates in prime time. George thinks Ted Cruz looks like Joe McCarthy. Listen to hear who he think Trump resembles. All very disturbing. Roscoe makes a prediction about who will be the Republican nominee.

Gary has been to see Writer’s Theatre’s great producion of  Doubt, set in the Glencoe Union Church. Our friend Geoff Barr, who works at Writer’s, gave us a tour of the outside of the new theatre under construction, scheduled to open in March. Looks like it’s going to be gorgeous. We can’t wait for the new season. They are doing Company!

HMS Media invited us to a live taping of a Kander & Ebb revue for a national PBS broadcast in February. The song selection was a little bizarre; we’re guessing “lesser known” Kander & Ebb. Still the performances were fantastic, especially from 2015 Tony award nominee, Kate Baldwin! This event was the setting for a hilarious encroachment incident involving a 5-year old in our row. Which leads us to other dismaying displays of complete lack of theatre etiquette. George tells us that people are texting even in church!

Blaze Starr: Icon of Burlesque read her fascinating obit The film Blaze, starring Lolita Davidovitch and Paul Newman, was based on her memoir. Here they are with director Ron Shelton at the New York premiere at the Ziegfeld Theater. 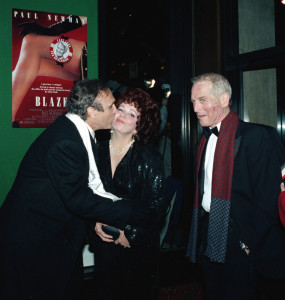