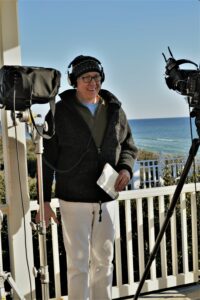 Seven-time Emmy award winner, WTTW producer, and documentary filmmaker Dan Andries joins us in the Booth! He arrived at the studio having just toured the Hamilton Exhibition on Northerly Island. Sounds like something we need to visit.

We recently discovered that Dan was creating a series of pieces for WTTW called “Stage Players.” They are very short interview pieces honoring all of the kinds of people who make Chicago theatre great. They appear between other programs and are excellent. It’s amazing how much they convey in such a short period of time.  We have had some of the same amazing guests. Check them out!

Dan’s career so far is pretty remarkable. He has been at WTTW since 2000. He was the series producer of Artbeat Chicago for 5 years, and did stories on the arts off and on for Chicago Tonight.  In 2005 he began working on documentaries, which included “Beauty Rises:  Four Lives in the Arts” (2006), “Cannot Live Without:  Illinois Artists at Work” (2014) and nine documentaries on architects, including Chicago architects Jeanne Gang and Tom Beeby and the amazing French architects Marc & Nada Breitman. Here he is in Paris with Marc and WTTW’s Geoffrey Baer: 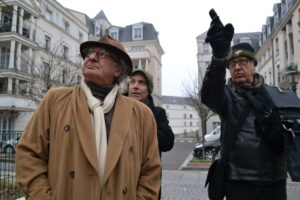 Other documentary projects include co-producing and co-writing “DuSable to Obama:  Chicago’s Black Metropolis” and “Out & Proud in Chicago” as well as 2 Geoffrey Baer tour shows (River and the Southwest Suburbs) and a show about the Irish (“Irish Chicago”).  Dan created the four-part series “Art & Design in Chicago” that aired in the fall of 2018.

Since 2006, he has also “had the great privilege of producing a multi-camera documentation of the work of Albany Park Theatre Project.” He does that work with his wife, Anne Northrup. One of those pieces, “Feast,” was broadcast on WTTW and won an Emmy.

He comes from a family of arts journalists.  His mother, Dorothy Andries was a music critic on the North Shore for Pioneer Press and his aunt, Wynne Delacoma, was the classical music critic for the Chicago Sun-Times for a number of years.

I’ll Be Seeing You: John Singleton:

In our regular segment celebrating the life of someone who has recently left us, Gary shares the story of filmmaker, John Singleton. He was a huge talent and contributed so much to our history of film making. Read his obituary from the Washington Post here