Warning: count(): Parameter must be an array or an object that implements Countable in /var/www/wp-content/themes/maronpro/lib/metaboxes/init.php on line 746
 Nena’s Notes – Fashion Expert & Writer Nena Ivon – Episode 88 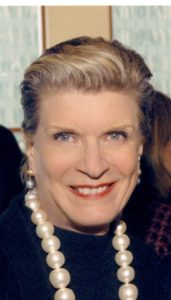 Fashion world icon Nena Ivon joins us in the Booth to talk about her astounding career, her varied interests in all things cultural, and so much more!

A legend in Chicago, Nena Ivon was the fashion and special events director at Saks Fifth Avenue from 1956 to 2009, where among other things, she produced all of the fashion shows, handled publicity, styled the windows and dressed the mannequins.

She has worked with hundreds of the leading fashion designers and style icons of the 20th and 21st centuries, including many great models. Nena talked about the quality one-on-one time she got to spend with these designers, picking them up at the airport when they came to town for Saks events.

She is currently a member of the executive board of the Costume Council of the Chicago History Museum, and a faculty member in Fashion Studies at Columbia College Chicago (where the Nena Ivon Collection is archived). 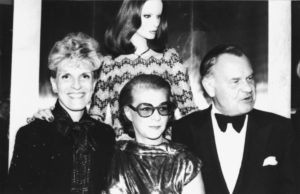 She is also the author of a marvelous blog called Nena’s Notes. We love the way she organized the blog. As you will learn in more detail on the episode, each day of the week has a different theme to reflect things she’s passionate about. Monday is for profiles of people, starting with a Proust-like questionnaire, then an interview. A favorite topic for her is how people reinvent themselves when they leave one career, such as the models she worked with. Tuesday is for book reviews. Wednesday is musings, which can go in a number of different directions. Thursday is for collections, not just of fashion, but also other beautiful objects. Friday is for Fashion. Spotlights on designers she’s worked with or the current season. Check it out. There is something for everyone. We are excited that she is working on a podcast and a book!

Amazingly enough, Nena has a direct connection to the real Booth One and the impetus for our show. Back in the day at Saks, they would hold two fashion shows a week at The Pump Room at lunch time. Then there were conversations in Booth One with stars, Broadway tryout cast members, authors, and local personalities. Nena led a number of these interviews. Oh, how we wish those were recorded! Speaking of Booth One, she is a huge fan of theatre, ballet, and opera. Her favorite medium is musical theatre!

Learn who Nena’s favorite designers are, including the great Bob Mackie, who she says is a brilliant designer of clothes as well as costumes. Gary tells Nena that he has never missed an episode of Project Runway. Her favorite designer to come out of that show is Christian Seriano and she tells us why. 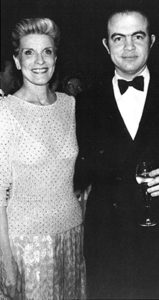 Check out this glam photo of Nena with Christian LaCroix. The photographer, Robert Carl, said of the picture, ““I love this shot of two sophisticates, Nena Ivon and Christian Lacroix. It reminds me of Grant Wood’s “American Gothic,” even though she is the high priestess of Chicago fashion and he is the darling of Paris.”

We talk about the new Library of Congress National Screening Room, which has films from 1890-1999. They are being digitized so we can all check them out. The goal is to have their vast collection reach the largest possible audience.

Nena talks about Guo Pei’s collection at Paris fashion week. Wow. Check out her stunning and show-stopping designs on her website.

Kiss of Death: Dorcas B. Reilley 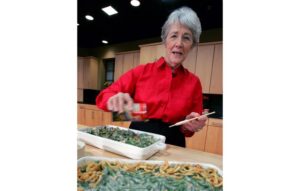 As you know, we end every episode with a celebration of a life. Our New York correspondent and good friend, Robbie Young, suggested Dorcas B. Reilley, the inventor of green bean casserole. She was a supervisor in Campbell’s Soup test kitchen and led the group to come up with a great dish that could be made with things already in most people’s pantries. Made with Campbell’s Cream of Mushroom soup, it offered “convenience with a touch of glamour.” Here is the original recipe, still being made today. It is estimated that it will be served in 20 million homes this coming Thanksgiving. Our producer’s grandmother added some Velveeta, which made it even better. Read her story here.