Warning: count(): Parameter must be an array or an object that implements Countable in /var/www/wp-content/themes/maronpro/lib/metaboxes/init.php on line 746
 To Catch a Fish – Playwright Brett Neveu – Episode 77 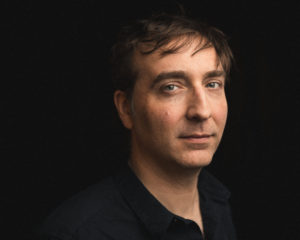 We were thrilled to welcome Brett Neveu to the booth just two days after being in the audience for the press opening of his marvelous new play, To Catch A Fish at Timeline Theatre. This production, masterfully directed by Ron OJ Parson, features one of the best ensemble casts we’ve ever seen, with standout performances by  Geno Walker, Al’Jaleel McGhee, Tiffany Addison, and Linda Bright Clay. We recently saw Al’Jaleel and Linda in Antoinette Nwandu’s Breach at Victory Gardens. What a treat to see their work again so soon! Based on a true news story set in Milwaukee, Brett’s play is about family and love and explores different types of love in a profound and very moving way. 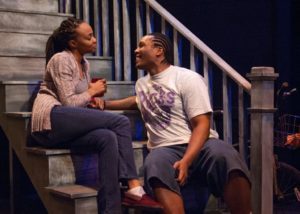 Timeline’s 99 seat theatre makes for an intimate experience.  All the seats are good. The show runs through July 1 and is an absolute must see!

This play came out of the Playwrights Collective at Timeline, which sounds like a very cool process for the writers.

Brett, like our friend and recent guest Stuart Dybek, teaches writing at Northwestern University. He teaches classes in writing plays, television, and films. We are hoping to sit in on a class!

Brett is a member of A Red Orchid‘s ensemble and has done 10 world premieres there. He has been interviewed by Booth One friend and guest, Mark Larson, for his book about Ensemble in Chicago Theatre and shares some of his insights about being part of an ensemble. A Red Orchid’s theatre space is quite small and intimate, which sparks Brett’s inspiration. As he says, “It challenges the actors and audience to communicate in a dangerous and interesting way.”

He studied writing at the University of Iowa along with some other amazing playwrights who are his good friends, such as Rebecca Gilman and Naomi Wallace.

Brett plays in a band called The Last Afternoons. Multi-talented much? 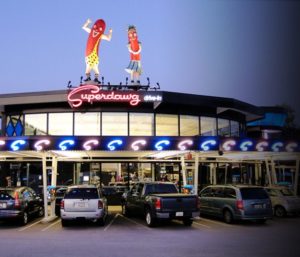 What a story! Florence Berman and her husband Maurie, started SuperDawg in 1948 as a way to pay the bills as they were going through school at Northwestern. All these years later, it is iconic. And we are happy to report that Brett Neveau and his daughter consider it to be an all-time favorite place. Read her beautiful obit by Maureen O’Donnell here.