Warning: count(): Parameter must be an array or an object that implements Countable in /var/www/wp-content/themes/maronpro/lib/metaboxes/init.php on line 746
 A Never Ending Story – Author Mark Larson Returns – Episode 74

Gary welcomes back to the Booth author Mark Larson, whose oral history is a chronicle of the past, present and future of Chicago Theatre. Having recently turned in his manuscript to date, Mark had interviews come through with Pulitzer Prize winning playwright and actor Tracy Letts, and actress Julia Louis-Dreyfus. It truly is a never ending story.

Julia attended Northwestern University and worked briefly at Second City before being scooped up by Lorne Michaels for Saturday Night Live, along with her husband Brad Hall and the two other members of their storefront Practical Theater Company. Four people asked at once is remarkable. Check out some footage of this here.

Woven throughout this update of Mark’s progress on his book, “Ensemble – An Oral History of Chicago Theatre” are anecdotes and quotes from amazing artists about what it’s like to have Chicago roots. And how the fun part was really before big success for many of them.

Gary and Mark also discuss seeing recent productions of Traitor at A Red Orchid, An Enemy of the People at the Goodman, and The Beauty Queen of Lenane at Northlight.

Michael Shannon directed Brett Neveu’s Traitor, which was an 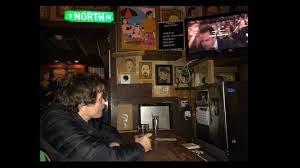 adaptation of Enemy of the People. Mark describes the trip the audience took for this performance and we are very sorry to have missed it. He also talks about Michael, who was a major supporting actor in Best Picture award winning movie, The Shape of Water, skipping the Oscars to come to the closing night performance of Traitor, then watching the awards on mute at the legendary Old Town Ale House.

Gary and Mark talk about theatre in these times of Trump. Mark points us to an excellent article in the New York Times in which Rachel Schteir describes several productions of An Enemy of the People as “timely as a tweet.”

Mark will teach a seminar to the 10 winners of the Golden Apple awards. If you haven’t read about this amazing project, started by Mike and Pat Koldyke, it is absolutely inspiring.

Speaking of inspiration, Mark was blown away when he sat in on one of Studs Terkel’s interviews at WFMT. His astonishing archive of radio interviews, what Gary and Mark call “A walk through the 20th century” will be available to the public on May 16. The website will be studsterkel.org.

Gary shares a New Yorker Talk of the Town piece about Extreme Theater Goer and hoarder of shows, Joanne Veniziano, along with excellent commentary from friend of the show, Nancy Needles.

Mark speaks eloquently about Emma Gonzalez and the other student speakers at March for our Lives. Listen and watch these breathtaking speeches.

Russ Solomon, Founder of Tower Records. His legacy was so great for so many of us. Read his NYT obit here.