Warning: count(): Parameter must be an array or an object that implements Countable in /var/www/wp-content/themes/maronpro/lib/metaboxes/init.php on line 746
 Dynamic Duo – Delia Kropp and Penny Slusher – Episode 71 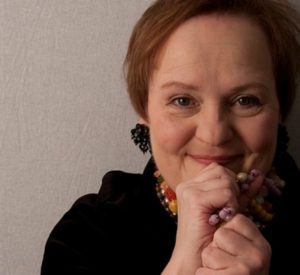 Actresses Delia Kropp and Penny Slusher join Gary and Frank in the Booth this week. Penny, a longtime favorite of ours, recently appeared in the Steppenwolf Theatre production of The Minutes, the new play from Tracy Letts. Delia was seen last season in a remarkable re-imagining of the Doug Wright play I Am My Own Wife at About Face Theatre, where the 30 characters were played by four actors rather than just one. Hers was a tour-de-force performance as Charlotte von Mahlsdorf, born Lothar Berfelde, who survived the Nazi and Communist regimes in East Berlin as a transgender woman, and the first time the role had been played by a transgender actress. Listen to hear the great story about how and why Delia proposed changing the way this Tony & Pulitzer prize winning play was presented.

Penny talks about growing up in Bristol, Tennessee, the “birthplace of country music”, and the one-woman show she is writing about her childhood experiences and the extended family that raised her. With a working title of “A Porch Song”, Penny hopes to capture the essence of Appalachian Bristol and her amazing upbringing among an apartment building full of relatives. Including her Memaw, who was the best friend of Mother Maybelle Carter. Click on the Bristol link above to read about all the cool things happening there.

Penny is an acting and auditioning coach with an approach that sounds like it would be not just effective, but fun too. She also does Intuitive Readings, using her innate gift for intuition and the things she learned watching her grandmother do “fortune telling.” She is down to earth and positive about people’s opportunities and challenges. If you’d like to schedule a session with Penny, go to www.pennyslusher.com and send her an email. Readings are usually done in her home, and she hopes you like cats (she has 2!).

Delia speaks candidly about her gender transition, her 10-year hiatus from acting, and the types of roles and opportunities she is now pursuing. Having known Penny since 1991, Delia credits her with helping ease and facilitate her transition, particularly within the Chicago theatre community. The group discusses gender in casting. Here at Booth One, we wonder whether there might be a place for Delia on Amazon’s Transparent alongside her friend, the brilliant Alexandra Billings. Delia is at work on an exciting web project to help trans and cisgender theater artists to meet. An online resource site for actors and other members of creative teams to learn about each other. Find out more about Delia on her website Therealdelia.com.

Though we didn’t talk about it on the episode, part of our Booth One research was to watch a great National Geographic documentary called The Gender Revolution. It is just excellent and we learned so much. Highly recommended!

The shop at 393 Amsterdam Avenue became an Upper West Side fixture in the lives of people desperate to keep the words flowing, and Mrs. Adelman was its centerpiece. “Every time you’d go there, it was always filled with people, that little shop — crammed with people,” one longtime customer, the playwright Peter Shaffer, the author of “Equus,” said in 2001. “It was like the cabin scene in ‘A Night at the Opera.’ You couldn’t get in the door.”