Warning: count(): Parameter must be an array or an object that implements Countable in /var/www/wp-content/themes/maronpro/lib/metaboxes/init.php on line 746
 Getting the Shot – Photographer and Theatre Artist Stephan Mazurek – Episode 68 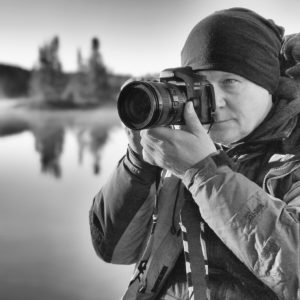 Gary’s guest this week is photographer, explorer, and theatre artist Stephan Mazurek. Stephan  is a storyteller – on screens, on stages, on buildings and on the web. He is a director of photography, still photographer, playwright, theatre director and projection designer. His clients include The Discovery Channel, National Geographic Channel, Food Network and ESPN, as well as spot work for Skittles, Nikon, Oscar Mayer, McDonalds and Goo Gone!

winning Louder Than a Bomb, which followed 10 Chicago area high school students for a year as they prepared for a poetry competition.

He also spent more than a year in Turkey, Somalia, Iraq and Bosnia shooting Love is a Verb, which tells the fascinating story of Fethullah Gulen, the exiled religious leader of the transnational social movement that began in Turkey in the 1960s, and bears his name. Gulen has been in the news recently because Mike Flynn was offered $15 million if he could bring him back to Turkey. Here is a photo of Stephan filming in Somalia with an armed body guard. 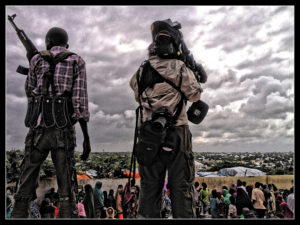 Documentary film-making has taken Stephan all over the world. He tells Booth One about a favorite place – Northern Ireland. He says there is something about “the pace, the color, the light” that make him feel comfortable there. 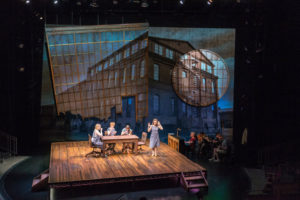 Though he has never taken a photography class, still photography remains Stephan’s first love because “I know when I have it.” He tells us how he gets inspired “just walking around.”

As a theater artist, Stephan has worked on numerous productions, designing projections for plays and musicals, including Shining Lives at Northlight Theatre. He also designed projections for The Remembered City, part of the Tim Evans’ Traffic series at Steppenwolf, which featured Tony Fitzpatrick and Steve Earle and was directed by our producer, Betsy Ingram. Stephan is currently working on a screenplay. We can’t wait to hear what it’s about and see the film!

Gary and Stephan discuss the infinite variety of theatre experiences available these days in Chicago, and what memorable stage encounters stay with them through the years. Stephan’s was in Spain, Gary’s in Hamburg, Germany. Stephan admits to being highly selective when choosing to take on a theatrcal project, knowing that he will want to fully dive into the work. He’s looking to be challenged, inspired and wholly committed to the process.

Having gone to some of the more troubled spots in the world to “get the shot”, Stephan relates a harrowing story about his interpreters in southern Turkey near the Syrian border while filming Love is a Verb. After getting him lost and then lying about their exact location, Stephan has decided that in future, he will demand translators instead – someone who will repeat his conversations word for word and not “interpret” what he is saying or asking. A good lesson learned.

Frances Hansen, Who Wrote Poetry Across and Down

The New York Times published 82 of Mrs. Hansen’s crossword puzzles, starting in the 1960s. The Washington Post, The Los Angeles Times and book publishers like Dell, Random House and Simon & Schuster also printed puzzles she constructed. A diabolical cruciverbalist, Hansen often used her own original poems and limericks as answers in the 21×21 grid that makes up the Sunday NYT magazine crossword puzzle. Many times clues were given backwards, and answers were to be entered back to front. She said that puzzles came to her in her sleep, left there by the “idea Fairy.” Mrs. Hansen was 85.