Warning: count(): Parameter must be an array or an object that implements Countable in /var/www/wp-content/themes/maronpro/lib/metaboxes/init.php on line 746
 Trevor the Musical – Episode 64 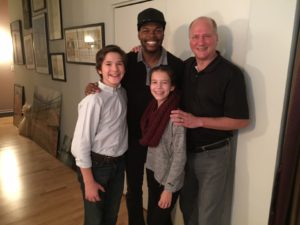 It was thrilling to welcome to the Booth two of the stars and the Assistant Director of Writers Theatre’s world premiere production of Trevor the Musical.

Eli Tokash, who plays Trevor, is magnificent on stage and off. He just lights up the room. He has met his match with co-star, Tori Whaples, who is terrific as Cathy in the show. And what can we say about Tyrone Phillips, who is doing amazing and exciting work in every aspect of his career.

Trevor began as a monologue written and performed by James Lecesne for his Drama Desk award-winning one man show Word of Mouth, directed by Eve Ensler and produced by Mike Nichols and Elaine May. He then adapted it into a screenplay for a short film directed by Peggy Rajski that won an an Oscar! Watch the film on YouTube here.

This story, set in 1981, is about Trevor, an exuberant middle school kid who is wild for Diana Ross. He has a great “cool” friend, Pinky Faraday (Declan Desmond), who likes him a lot. When one of Pinky’s friends insinuates Trevor may be gay, he tries to prove he’s not by making out with Cathy, who has a huge crush on him.

However, when Trevor’s adoration for Pinky (documented in a notebook) is revealed to classmates by his best friend, Trevor gets bullied and shamed at school. Trevor’s emerging sexuality is confusing for him and he is getting no support. This kid who is so full of light winds up attempting suicide.

When James and the film’s producers realized that a resource for kids dealing with the issues Trevor raises didn’t exist, they started the Trevor Project, a life saving non-profit organization. The goals of the project are “to provide crisis intervention and suicide prevention services for lesbian, gay, bisexual, transgender and questioning (LGBTQ) young people ages 13–24, as well as to offer guidance and resources to parents and educators in order to foster safe, accepting and inclusive environments for all youth, at home and at school.” Since it’s inception in 1998, The Trevor Project has helped hundreds of thousands of kids. 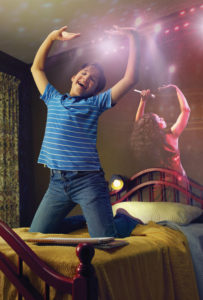 This world premiere musical is produced by Writers Theatre by special arrangement with U Rock Theatricals, a group of young producers making new shows aimed for Broadway. Director Marc Bruni has done a wonderful job of leading this tremendous ensemble and creating a vibrant and important piece that is full of so much heart. We are so lucky to have seen it here first and to have had a chance to talk with these three superstars. They give us an inside look at the process of creating a new musical. The immensely talented writing team of Julianne Wick Davis and Dan Collins were in the room for rehearsals. New pages every day, all different colors. Eli says their notebooks became a rainbow, “Pride scripts!” The Major Production Sponsor for this show is Booth One’s friend and Creative Consultant, Mary Pat Studdert. Here’s to Mary Pat for doing so much to make it happen.

Eli, Tori and Tyrone tell us about director Marc Bruni’s exciting and collaborative style. Tyrone talks about how professional this cast of young performers has been, calling them “the best in the business!”He says there was so much play in the room and it was all about them finding their voices. He goes on to say that this piece is about “anyone who has felt awkward, embarrassed or excluded. It’s about being different, an outsider.” We can all relate to that.

Finally, learn some sort of random and fun things about our guests by listening to them answer a few Chat Pack questions.