Warning: count(): Parameter must be an array or an object that implements Countable in /var/www/wp-content/themes/maronpro/lib/metaboxes/init.php on line 746
 Pass Over – Playwright Antoinette Nwandu & Director Danya Taymor 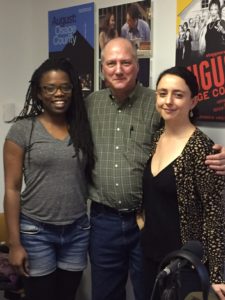 Gary interviews playwright Antoinette Nwandu and director Danya Taymor during rehearsals of Nwandu’s play Pass Over, on site at the Steppenwolf Theatre. We are attending a press performance on June 13 and cannot wait!

They share fascinating insights about the process of creating a world premiere, with Antoinette developing the script throughout the rehearsal period. These two are absolutely inspiring as artistic collaborators. So much mutual respect, affection, and humor. Booth One would love to be in the rehearsal room!

Antoinette describes Pass Over: “At its core, this play asks us collectively to consider the value of black lives, specifically the lives of young black men who are not extraordinary, who are not entertainers, they’re not athletes, they’re not secret math geniuses. They’re young men who might never get better, who might never be different. This play challenges us to envision a society that does not ask these young men to prove their worth.” 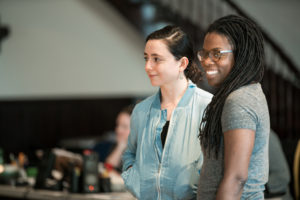 Inspired in part by two young black men Antoinette taught in community college, she riffs on ideas and themes from both Samuel Beckett‘s Waiting for Godot and the Book of Exodus.

Ms. Nwandu tells us the Cinderella story about how this play came to be produced at Steppenwolf. Thrilling!

Not only a great director, Danya is also a translator. Her story about the translating partners she works with is fascinating. Antoinette also tells us Danya has “world class knowledge of all theater.” Our producer is wanting a trivia contest between Danya and Gary…

A couple of our favorite quotes from the interview: Danya: “The truth of this play can shift on a dime.” Antoinette: “I write with a lot of jagged tonal shifts.”

When asked who they would like to spend a month being mentored by, Danya chooses European director extraordinaire Romeo Castellucci. Antoinette chooses the remarkable playwright Caryl Churchill. Good calls!

Danya and Antoinette are two theatre artists that are without a doubt “going places”. Booth One is so excited to follow their skyrocketing careers.