Warning: count(): Parameter must be an array or an object that implements Countable in /var/www/wp-content/themes/maronpro/lib/metaboxes/init.php on line 746
 Words & Music – Carlos Kalmar and Christopher Bell of the Grant Park Music Festival – Episode 36

Meet the artists who lead Chicago’s world-class summer music festival. Principle Conductor and Artistic Director Carlos Kalmar and Grant Park Chorus Director Christopher Bell share the microphone with Gary in this behind-the-scenes conversation at the Grant Park Music Festival. Now in its 12th Season at the stunning Jay Pritzker Pavilion in Millennium Park, the GPMF is the nation’s only free outdoor classical music series of its kind. Read about its fascinating history here. 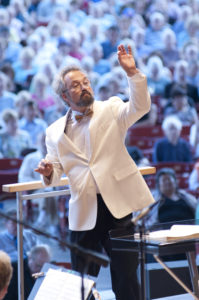 First up, Maestro Kalmar discusses the non-stop fevered nature of putting on a 10-week program of music and entertainment, and how two of the festival’s key words for the summer are “time management”. Carlos talks about his programming philosophy, his desire to please a wide range of patrons’ musical interests, and his unswerving commitment to presenting not only new and rarely heard pieces, but the works of American composers in particular.

Gary asks Carlos about particular pieces on the season calendar, including works by Matinu, Gandolfi, Kernis and Berlioz. And of course the Tchaikovsky Spectacular on Aug. 12 & 13, featuring the the “rediscovered” 1879 version of Piano Concerto No. 1. For the full summer calendar of events, go to the GPMF Website. 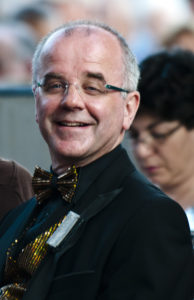 Finally, discover what other profession Carlos may have pursued as a young man if music hadn’t been his overwhelming passion. The answer may surprise you. Congratulations on 17 glorious Seasons with the GPMF!

Next up, Gary talks with the always entertaining and insightful Christopher Bell, now in his 15th Season with the Grant Park Music Festival. Read his bio here. Christopher has spent a great deal of his career working extensively with Youth and Junior Choruses, particularly in Scotland and his native Northern Ireland. We’ll learn about his mentoring and what he finds so rewarding about these endeavors.

Christopher discusses the Chorus outreach concerts this summer, which will feature Shakespeare-themed works in alignment with Chicago’s Shakespeare 400 celebration happening all over the city in 2016. And one of his favorite conducting assignments of every season, the spectacular July 4th Independence Day Salute to America and the Armed Forces, with special guests the National Youth Choir of Scotland. See the lineup for that concert here. Christopher never fails to dazzle in sartorial display each Fourth, and this year should be no exception.

And speaking of fashion, we learn about the history of Bell’s formidable shoe collection, where he stores them, and what makes him such a footwear fanatic. There’s no question that his sparkling personality is reflected in his choice of attire.

It’s an honor and a privilege to have these two distinguished artists on Booth One. We hope you will take advantage of the marvelous events that the Grant Park Music Festival offers this and every summer. We recommend a picnic supper on the lawn under the stars. BYOB! And may the music never end.