Warning: count(): Parameter must be an array or an object that implements Countable in /var/www/wp-content/themes/maronpro/lib/metaboxes/init.php on line 746
 The “IT” factor in Booth One Experiences – Episode 21

It’s the weeks between Thanksgiving and Christmas and Gary and Roscoe are in festive moods. They relate their favorite decorations and where you can see the best of the holiday season in Chicago.

Roscoe visited the 40th Annual Lillstreet Holiday Show & Sale and he has a particular take on the goings on. read more here

It’s time to call a spade a spade and stop pussyfooting around with sharks! Sydney Morning News writer Frank Robson makes his case for ending the “encounters” terminology and just calling an attack an atack. “If we consistently offer ourselves up for a mugging in their shadowy world, chances are that one of them will eventually oblige.” Full story

Who needs long-running shows? Chicago does! Gary and Roscoe discuss the closing of Million Dollar Quartet

after 8 years, and whatever happened to sit-down companies, both Broadway-style and off-Loop.

City Center Encores! will present a series of talk shows about musical theatre entitled “Unscripted”, streamed live on line from NYC and later available as videos and podcasts. Wish we’d have thought of this first! All about it

We review recent Broadway openings – A View From the Bridge (rave), and (less than rave) Misery.

A shout out to entrepreneurs Justin and Dave for their bacon-themed condiments and gifts. Friend of the show Margalit Fox passed on this oddball website featuring Bacon Salt, Baconnaise, Bacon Underwear and the ultimate, Bacon Cooking Armor! 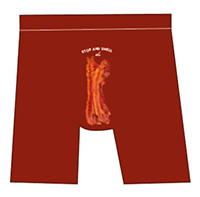 Makes a great stocking stuffer! Just keep the dogs away.  Check out their products

Gary recounts his visit to the Ringling Bros. and Barnum & Bailey Circus this past week. To hear him tell it, this truly is “The Greatest Show On Earth“. Gary agrees with Chris Jones in the Trib that these elephants are getting a wonderful send-off: Chris Jones story

We’re giving away another $100 Gift Card to a fine Chicago eating establishment. This time it’s The Dawson on west Grand Avenue.

Gary’s Booth One experience this week was seeing Academy Award-nominated actor Michael Shannon, when he returned once again to his Chicago roots at A Red Orchid theatre in new play, Pilgrim’s Progress by Brett Neveau, directed by Shade Murray. Learn more about A Red Orchid.

We discuss why Shannon has the “IT” factor that so many great actors carry on stage and screen. And why it’s important to have a large head – literally – on film. read more

More about the IT factor: The eyes are the windows to the soul, and that’s never truer than when a singer is on stage. Gary and Roscoe discuss what happens for an audience when actors close their eyes.

Here’s a little insight into lessons for singers – see #4.

Don’t forget to send us your Booth One photos and Booth One experiences. We’ll be posting these on our website for all to see and be envious of. Including us!

Adele Mailer, nee Morales, was married to world-famous novelist Norman Mailer. While their relationship was described as “stormy”, nothing could prepare us for the incident of November 9, 1960 when Norman stabbed Adele multiple times with a penknife at their NY apartment in the wee hours of the morning after a night of drunken partying. 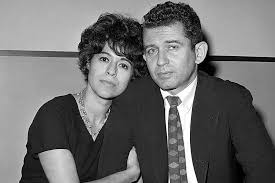