Warning: count(): Parameter must be an array or an object that implements Countable in /var/www/wp-content/themes/maronpro/lib/metaboxes/init.php on line 746
 Time Lapsed Continuousness – Court Theatre Artistic Director Charlie Newell

Gary and the Bo 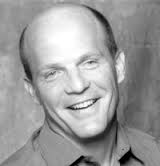 oth One crew are pleased to welcome award-winning artistic director of Court Theatre, Mr. Charles Newell to the program. Court is the resident professional theater company of the University of Chicago in Hyde Park. Charlie has been AD at Court since 1994. Under his leadership, Court has, in the words of playwright Tony Kushner, “developed a spectacular reputation as one of the most important

theaters in the country.” Charlie’s directing credits span a spectrum from classic Shakespeare to world premiere dramas and comedies, from musicals to opera. He is the recipient of four Joseph Jefferson Awards for directing, and has been honored by TCG and the League of Chicago Theatres for artistic achievement. Charlie is one of the finest theatrical artists working in America today and refers to himself as “the luckiest man in show business.”

Newell grew up in the Washington, DC area and first fell in love with theater when he saw an Arena Stage production of Death of a Salesman as a young boy. He studied at Wesleyan University, then honed his craft through a series of professional apprenticeships with some of the country’s most outstanding theater artists, including Garland Wright at the Tyrone Guthrie Theater in Minneapolis.

cent work is a production of Tom Stoppard‘s The Hard Problem. The title comes from philosopher David Chalmers’ term to describe scientific efforts to understand consciousness. We discuss this play in depth as well as Newell’s close relationship with Mr. Stoppard. Charlie and Tom have consulted personally on a number of other Stoppard productions Charlie has directed. For this one, they had almost daily conversations about the play during rehearsals. In his early career as a stage manager, Gary had the great privilege to work on the Broadway and National touring productions of Stoppard’s The Real Thing. He and Charlie trade stories about working with Stoppard and what a true man of the theater he really is.

Much like Stoppard’s other works, The Hard Problem is a tricky play to fully comprehend on a single viewing. Charlie talks about the way Stoppard’s focus is centered on the emotional connections between the characters rather than the intellectual ideas. “If one can find the heart of it, the rest will fall into place.” We think you will find the discussion illuminating and fascinating.

Court Theatre takes full advantage of being part of the University of Chicago. In 2010, with the support of some very generous members of the Board of Trustees, Court created The Center for Classic Theatre. “A new way of approaching what it means for a professional theatre to be in residence at a major university. It is an approach to producing that fully accesses the amazing

intellectual resources that surround the theatre. This vision influences how Court Theatre builds seasons and serves its audience and community.” The results have been exciting. For instance, this season Court produced the widely acclaimed world premiere of Man in the Ring. Playwright Michael Cristopher won the best new play award from the American Theatre Critics Association.

Still to come this season at Court is a rare production of Mary Chase‘s Harvey. Recently announced for the 2017-18 subscription season: Five Guys Named Moe; The Belle of Amhurst directed by friend of the show  Sean Graney and starring Kate Fry; All My Sons; Guess Who’s Coming to Dinner; and The Originalist with Edward Gero as Supreme Court Judge Antonin Scalia.

Some final personal information about Charlie – Favorite City? Chicago (no surprise there!); Other career he would have liked to pursue? Basketball Coach or General Manager. The Chicago Bulls may be looking!

Gilbert Baker, a self-described “gay Betsy Ross,” and creator of the original Rainbow Flag that has become an enduring and universal symbol for inclusion, peace and love. The original banner, created for the 1978 Gay Pride parade in San Francisco, measured 30 x 60 feet and had eight colors, each stripe carrying its own significance. Mr. Baker refused to apply for a trademark for his creation and never made any money from the banner. Gilbert Baker was 65. 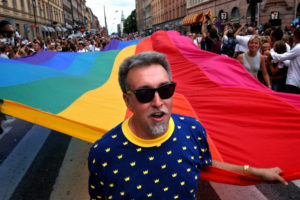